Mutual Events of the Jovian Satellites

The observation of mutual occultation and eclipses of the Galilean satellites of Jupiter is underway. Have a look at these phenomena. You can find a table of the main events for Europe here.

(99942) Apophis is a Near Earth Object, which is on a high priority list because ot close encounters with the earth. On the 7th and 11th of March occultations with bright stars will happen in Europe and in the USA. Please have a look at the information and try to observe, if you are cloe to the track.

Predictions for Asteroids of the "Neglected Asteroids" Program

To support the observation campaign by Anna Marciniak for neglected asteroids, predictions of occultations for February 2021 can be found here.

For IOTA/ES members: Items to lend

On the membership page you find a list of technical items, which could be lent by IOTA/ES members.

A special observations campaign is organized by Anna Marciniak for neglected asteroids. These are small bodies of the main belt with slow rotation and small lightcurve amplitudes, avoided by most of previous studies. Have a closer look!

Moon occults Venus on the 19th of June 2020 in the morning. For Berlin its around 8h UTC. The situation for Berlin is shown in this graphic visualization using "Carte du Ciel" planetarium software. 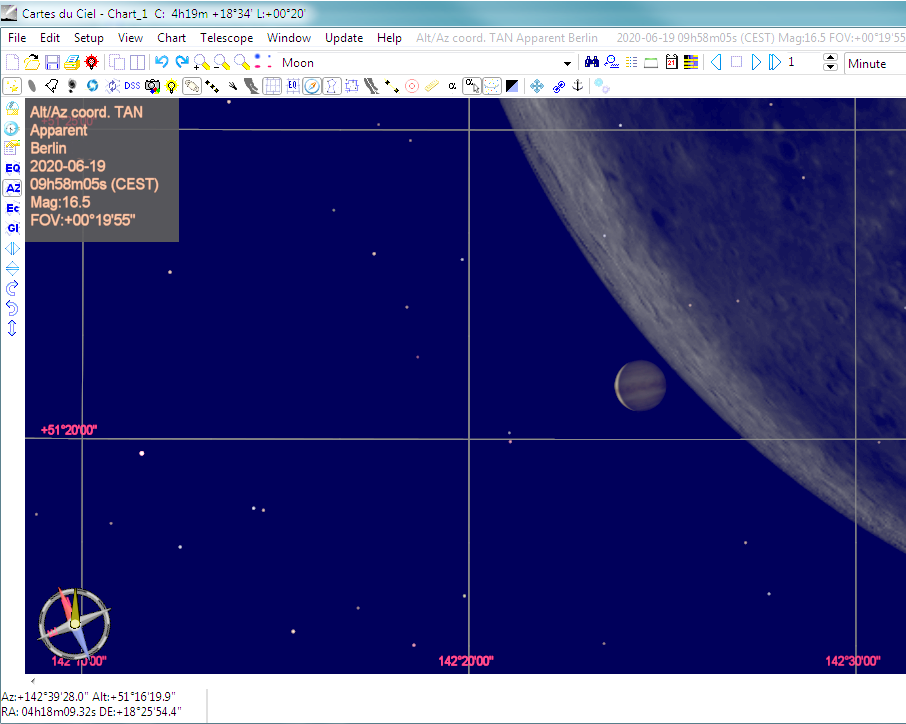 A tutorial about the SharpCap software, generating timestamps and Tangra software was written by Christian Weber. It's not only interesting for those who attended the workshop about QHY174GPS camera. You can find it here.


A Workshop about using the QHY174 GPS Camera in Berlin

A workshop about the use of the QHY174GPS camera was held on the 29th of February 2020 in Berlin/Germany at the Archenhold Observatory. It addresses the use of the camera system with GPS timing inserts from the beginning.

If you are interested in the presentations have a look at the agenda of the workshop.
Call for Observation

In October 2019 an occultation by the triple system of asteroid and its two moons was successfully observed in Europe. Now there is another opportunity to learn more about (87) Sylvia and its satellites. But the targest star is much fainter, so large apertures are needed for detections of occultations by Romulus and Remus. Find out more!
Call for Observation

In the late evening of February 11 around 22:01 UT the minor planet (4) Vesta will occult HIP 14439 (5.3 Vmag) for a maximum duration of 28 seconds with a drop in magnitude of 3.0 mag and an approximate projected width of 522 km. UK, Ireland, Norway, Denmark, Germany, Sweden and Poland and the the Baltic states are inside the path. In the eastern European countries the target star will be very low in the western sky. Have a look!

For central Europe, visible from Frankfurt am Main, Germany, a list of lunar occultations of stars brighter than mag 4 has been calculated. Have a look!

A new tutorial with the title " Tutorial - Using Occult for (Total) Lunar Occultation prediction, reporting and analysis." by Dave Gault and Dave Herald has been added to our guideline section. Have a look!

One of the most prominent examples of occultations is a lunar eclipse. The longest lunar eclipse of this century takes place just now! The image with a conventional DSLR camera has been taken from Munich. Copyright W. Beisker, IOTA-ES (2018) 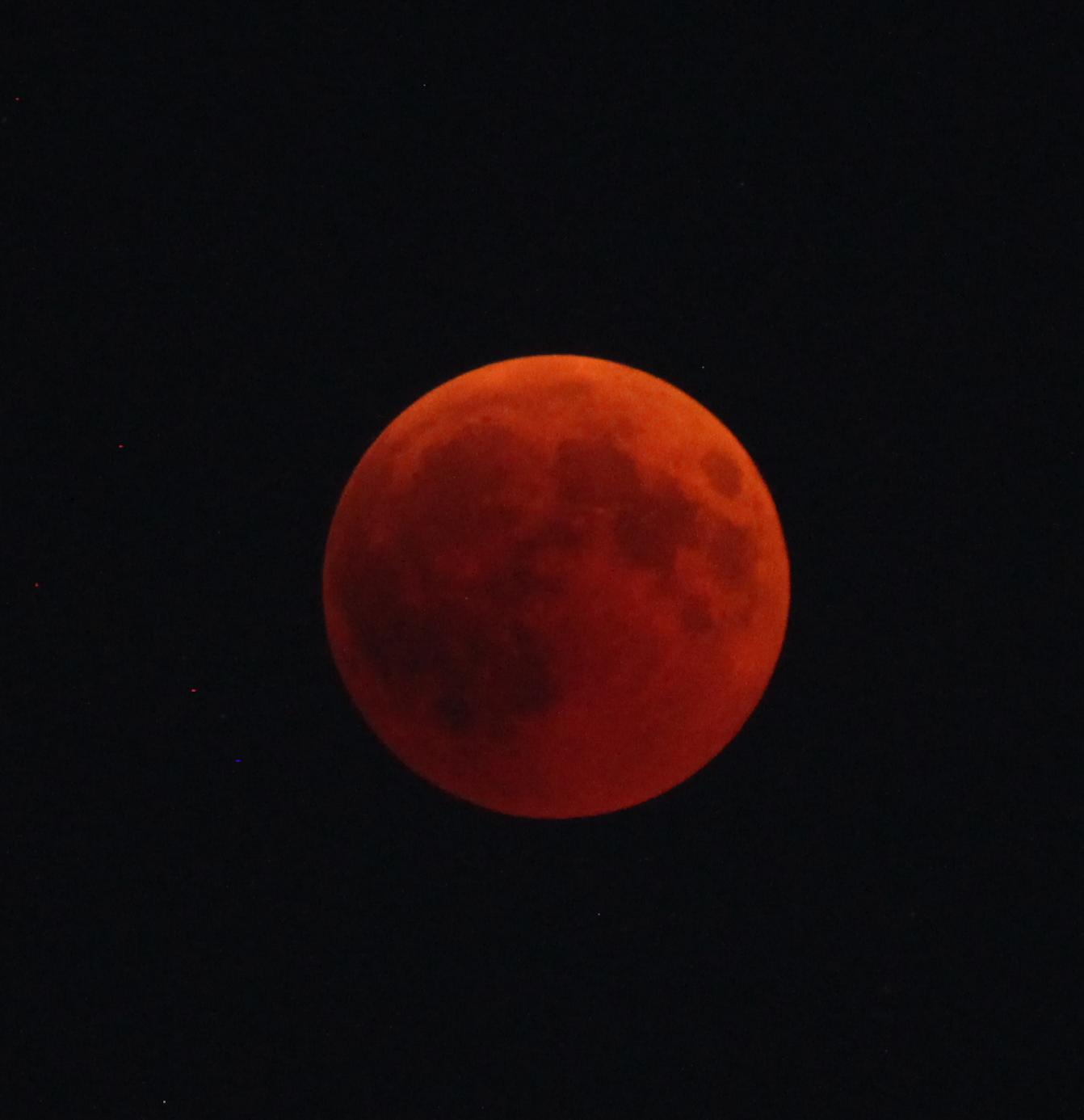 Successful observation of the occultation by Himalia of 10m5 star!
Observed from stations in Poland and Ukraine.

Positive chords from the Himalia event are to be reported. Two with the double system Max and Moritz operated by Anna Marciniak (Moritz)) in Poznan and 100km away the other by Eberhard Bredner near Konin (with Max) and a third, very short occultation (~2 sec) observed by Roman Hirsch (Astronomical Observatory Institute) in Borowiec. Also positive observtions in the Ukraine. More news will follow!

Himalia, an irregulate satellite of Jupiter will occult a 10mag star on the 20th of May 2018 around 22h 16min UTC for northern and eastern Europe. The occultation track has moved about 180 km north! Read more!

Over 30 stations participated in the most successful observation of an occultation by (130) Elektra ever. Never before has the shadow profile of minor planet (130) Elektra been so accurately measured. More than 30 observers from Italy, Switzerland, France, Belgium and Great Britain measured the occultation around 00:30 U.T. on April 21, 2018. Read more!

GRAZPREP-software for 2018
Find and prepare grazing occultations in detail

Grazing Occultations of stars by the moon are local events and thus require an individual selection according to personal observation preferences. The GRAZPREP-software assists in all aspects of finding individually interesting events as well as selecting the best observing stations promising the most contacts between the star and the lunar limb in high resolution. GRAZPREP can be downloaded and installed, including a step by step operation tutorial.
Find more informations about this software package! Call for Observation

On 28th of January 2018, around 21h55min UTC, the TNO 2002TC302 occults a 15m8 star. This is a relatively easy to observe event, because of the low speed of the TNO relative to the star of only about 5km/sec. Give it a try! Even instruments with less than 30 cm diameter should do it. And you don't need a high speed camera for this slow event. With 1 or 2 seconds exposure time you can do valuable science! A new update of the prediction has been issued by J. Desmars. Have a look!.

A campaign has been set up for this event. Have a look!

Haumea, the most peculiar of Pluto companions, has a ring!

The trans-neptunian belt contains four dwarf planets, among which Haumea stands out for its extremely elongated shape and rapid rotation.

A stellar occultation revealed the main physical characteristics of this heretofore poorly known body – among which the most surprising presence of a ring. Researchers around Jose-Luis Ortiz and Pablo Santos-Sanz published a paper in Nature, that showed a ring around Haumea. This is the first trans-Neptunian object with a ring.
"One of the most interesting and unexpected findings was the discovery of a ring around Haumea. Until a few years ago we only knew of the existence of rings around the giant planets; then, recently, our team discovered that two small bodies situated between Jupiter and Neptune, belonging to a group called centaurs, have dense rings around them, which came as a big surprise. Now we have discovered that bodies even farther away than the centaurs, bigger and with very different general characteristics, can also have rings,” says Pablo Santos-Sanz, a member of the IAA-CSIC team. Also members of IOTA-ES, professionals and amateurs as well, contributed to this research. It has been published by
J. L. Ortiz et al. "The size, shape, density and ring of the dwarf planet Haumea from a stellar occultation". Nature, (2017) DOI: 10.1038/nature24051 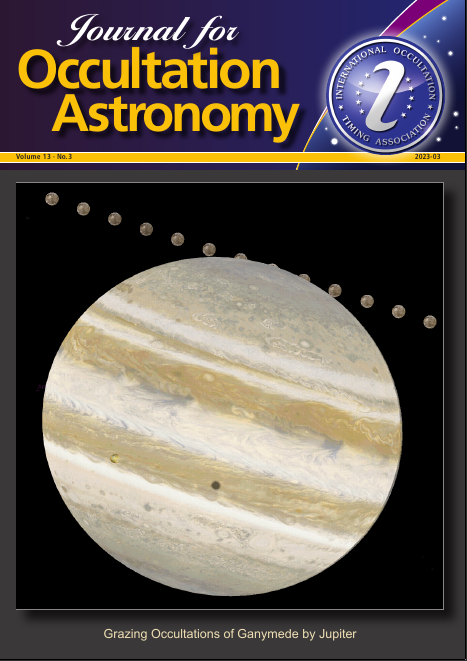 Many stations throughout Europe have recorded the event with telescope of different sizes ranging from 20cm to more than 1 meter diameter. An example of the central flash recorded near the central line in Elvas, Portugal is shown in the following picture. It as been taken with a 27cm telescope and a 12 bit digital CCD camera.

The updates of the predictions of this campaign can be
followed here.

Actual Predictions for 55 TNOs and Centaurs

In the frame of the European-funded Lucky Star project, a webpage with actual predictions of occultations 55 TNOs and Centaurs had been developed by Josselin Desmars from Bruno Sicardy's team. Occultations can be selected by date, magnitude range and name of the occultation object. Have a look!

Occultations by stars brighter than about 9th mag will be presented in this blog.https://call4obs.iota-es.de

Grazing Occultations of Stars by the Moon

A field of professional astronomy between science and beauty
Among all occultation phenomena in the sky grazing occultations of stars by the moon have a very unique character. The observation of these spectacular events ... read the overview in full length!

Asteroid TU24 recorded from Munich around 1h 10min UT on 30th Jan 2008. Fast motion (5x). Near miss of 11m9 star TYC 4140-520 EU-Project EUROPLANET creates a database for professional and amateur observatories!. Have a look to their questionaire! Read more...

Information about running campaigns for TNO occultations you can find here at Felipe Braga-Ribas website. Follow up the prediction process and get ready to observe if it is in your area!

Inauguration of IOTA-ES 0.5m portable telescope.
It has been named "m2"

On the 8th of October an inauguration party has been held at the Archenhold observatory in Berlin. Members of IOTA-ES including the board of directors celebrated the inauguration with champagne and sausages.
The first real observation with the instrument had been the successful observation of the occultation by Pluto on the 19th of July 2016. It will still take some more time, to finish some minor work and to write the operation instructions. But in the near future it can be booked by IOTA members for observation projects. Read more!!

Successful observation of a Chariklo occultaton in Namibia with the 0.5m portable instrument m2.

On the 9th of April the m2 instrument was used by IOTA-ES member Mike Kretlow as part of an international campaign in cooperation with the EU research project LuckyStar to observe the occultation of UCAC4-294-211208 (14m) by Chariklo in Namibia. Despite poor weather situation, the occultation could be recorded using a Raptor camera with 0.08 sec exposure time. This was the first "Out of Europe" use of m2.

More positive observations came from a IOTA-ES member (Karl-Ludwig Bath) observing at the IAS observatory (Hakos). One more station operated by Jean-Luc Dauvergne was successful too. 3 out of 6 deployed stations got data, the other failed due to unfavorable weather conditions.

A very preliminary lightcurve shows the central body near its maximal diameter and the rings of Chariklo as well.
Follow us!

The XL European Symposion on Occultation Projects will be held in Bialystok, Poland


The Journal for Occultation Astronomy

is now free for all! Have a look!

Occultations of Bright Stars by Minor Planets can be found here .

You have to know, how to report lunar occultations! Your reports have to be sent to the email address lunoccult.

Dave Herald reports from Australia how to do it!!!

A "Lunar Occultations Add-in" for "OccultWatcher" to get interesting lunar occultations of double and suspected double stars. Read more.