(99942) Apophis is a Near Earth Asteroid (NEAR) discovered on June 19, 2004, which was temporarely assumed to be a potential impact risk for earth in 2036. This risk assessment was lowered considerably, an impact in 2036 is more or less unpossible. However, Apophis is still a very high priority target for observation, specially for occultations. On March 11th the object has a flyby with earth in a distance of only about
According to Paolo Tanga from OCA it has "several close encounters with our planet, and is one of the small objects for which accurate astrometry can refine the measured drift in semi-major axis due to the Yarkovsky effect".
Apophis has an average diameter of 370 m, but a flattened shape (approx. 450 x 18 m) as measured by radar ranging (Brozoviç et al. 2018). On March 6th, 2021 at 01:06 UT Apophis will be at its closest at ~43.8 lunar distances from Earth. The next close encounter will be that of April 13th, 2029.

We got the prediction for this occultation from Paolo Tanga, the LuckyStar Project and others to occur on the 11th of March 2021 from 19h42 to 20h14 UTC. Details cann be found on the chart generated by Occult software.

The uncertainty (1-sigma level) is around 2.5km, which is about 6 times the diameter of the object. Therefore its a delicate observation, but everybody close or on the track is urgently requested to join the campaign. High aquisition speed is required, because the occultation will only take about 0.1 seconds.

The files for generating the prediction using Occult can be downloaded here.
A corresponding occultation will take place across the US, information for that you can found here.


More detailed information about the events from Paolo Tanga you can find here.


European Occultation on the 11th of March 2021 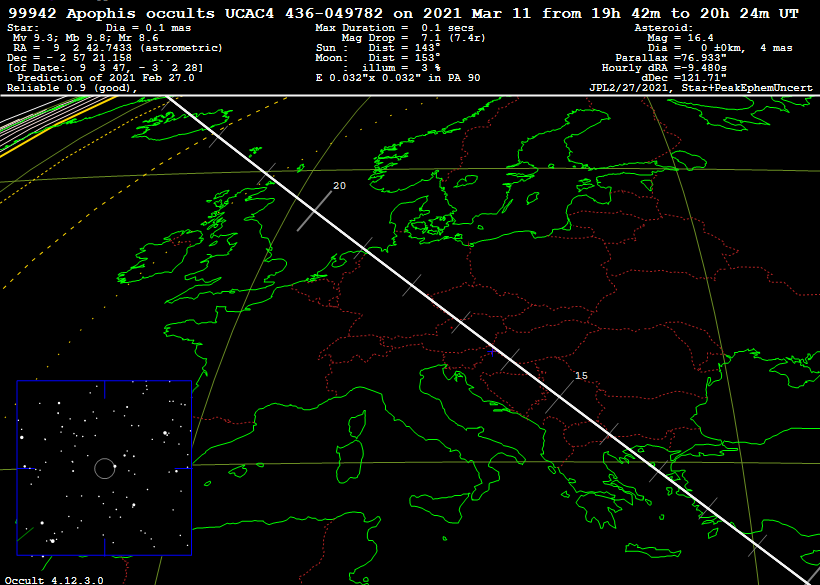 USA occultation on the 7th of March 2021 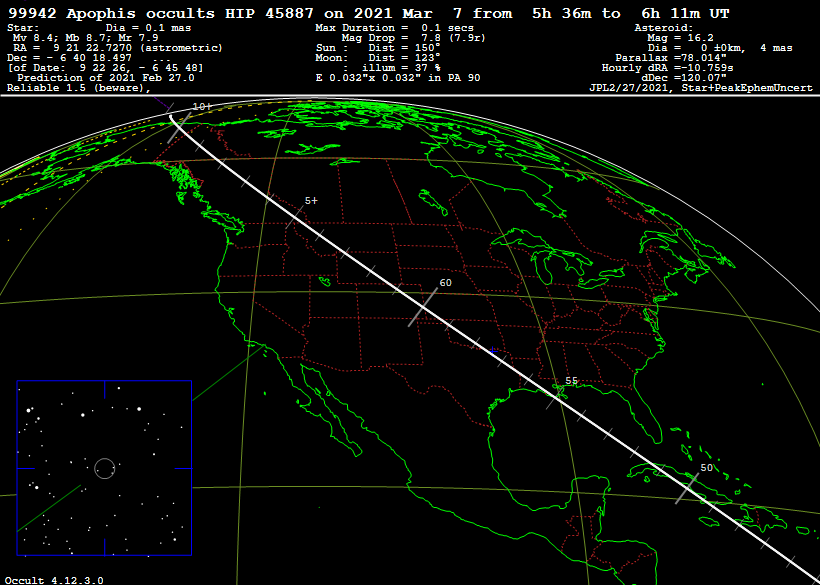